The newest Apple TV, generation 4, lost its optical audio out port. The only way to get audio out these days is over HDMI. I had an old fully analog 90's amplifier that I would like to use, but I couldn't find a solution. Going through my TV's headphone out port introduced horrible feedback loop noise (and also required the TV to be on) and I didn't really want another gizmo sitting around, so an HDMI audio extractor wasn't ideal either. They were also surprisingly expensive, starting at €30 for sketchy ones off eBay to €100+ for ones sourced locally.

Posted by BoLanggaardLind at 10:20 PM No comments:

Ever had the need to connect an external microphone to a MacBook Pro and realized that the laptop in question only have a single 3.5mm mini jack port, and require a TRRS connector?

The solution seems to be to get a Sennheiser PCV 07 Y-splitter. I only had luck if I also, concurrently, had a pair of headphones hooked up to the headphone port. 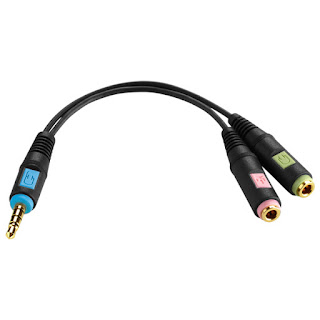 This may or may not also work on other Mac laptops such as the MacBook and MacBook Air.
Posted by BoLanggaardLind at 6:40 AM 3 comments: